Written from a 'critical libertarian left perspective', Safety First will not, I suspect, get Paul Anderson and Nyta Mann invited to many Downing Street cocktail parties. Theirs is a voice from outside the conventional Labour spectrum and, in this stimulating and informative account of the so-called Blair Revolution and the first one hundred days of the 'New Labour' government, they treat the official version of the party's recent history with healthy scepticism. Combining sharp analysis with a robust narrative of political events, they show that serious, heterodox thinking – the legacy of independently minded radicals such as George Orwell and Raymond Williams – has survived the broad left's disintegration into 'new' revisionists, 'old' reactionaries and the persistently extremist fringe.

They raise many important questions about the origins and development of current policy, present Blairism in a convincingly realistic manner and attempt to determine exactly what it is that New Labour stands for. After eight months the hysteria of the election campaign has subsided and Safety First is a timely investigation into the personalities and politics behind New Labour's extraordinary victory.

Nothing if not detailed, the book focuses on each of the 'major players' in turn. It reveals how, in the early 1990s, these came to be identified with Labour's revisionist wing and formed the distinctively Blairite group which took control of the party and then led it into government. However, although it includes plenty of entertaining biographical material – Gordon Brown's political career at university, for instance, or John Prescott's jokey apology for having introduced Peter Mandelson to parliamentary politics – the book's main strength lies not so much in the vividness of its ten portraits as in the lucidity with which the political realities of life within New Labour are described.

In emphasising the effort and determination with which it was effected and the compromises which have had to be made to ensure its success, Safety First does much to counter the myths which the Blair revolution has spawned. To the outsider, it may seem as if Labour has undergone a kind of Enlightenment: that Blairism is a wide-ranging, coherent philosophy to which, over the last few years, the majority of Labour members have been converted through persuasive argument: and that the direction taken in the name of 'modernisation' is the only one which the party could have taken.

In Safety First, the story is rather different. Whilst granting that the tone of Labour politics has become more professional since Tony Blair became leader in 1994, and that the party's public image has been reinvigorated, the authors argue that many of the significant changes credited to Mr Blair had already been initiated by previous leaders and that Labour's much heralded unity of purpose and belief is not as firm as it appears. Moreover, opposition to key policies on education, the economy, welfare and so on has not only come from the Old Labour contingent. Senior members of the leadership, including John Prescott, Robin Cook, and David Blunkett, have, at times, joined the 'chorus of disapproval'.

The consensus which Blairism supposedly represents has not so much evolved as been forged through good old-fashioned backstage manoeuvring, 'vigorous arm-twisting' and 'constant private rows'. As a result, it is no longer possible to speak of Blairism as a comprehensive radical vision. On the contrary, it is, the authors claim, an altogether piecemeal affair, a curious blend of liberal ethics and populist authoritarianism, patched together and pushed through by a leadership intent on gaining power.

This, of course, should come as no surprise. In the post-ideological world, politics and pragmatism go hand in hand and New Labour, despite its occasionally evangelical rhetoric, remains a political party just like any other.

If this seems an unduly cynical version of events, Safety First is not a hatchet job. The authors welcome the change of atmosphere New Labour has brought to British politics and praise the energy with which the government have set to work. They even admit to feeling slightly queasy about criticising the new government so soon after it has taken office and acknowledge the possibility that some of their more worrying conclusions may be proved wrong: the 'serious tensions between the goals that New Labour proclaims and the means it has chosen to achieve them' may not be as disabling as they suspect.

Such directness is refreshing. For a long time the left's debate with itself – once considered to be an important part of British political culture by pundits of all persuasions – has been reduced to the level of a tiresome brawl between Old and New Labour and has produced little more than breathless eulogies in praise of this faction or that. With its firmly reasoned arguments, Safety First goes some way, at least, towards reviving the art of constructive political criticism.
Posted by Paul Anderson at 22:53 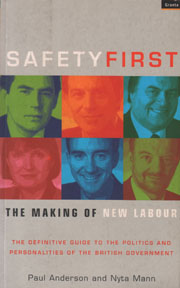 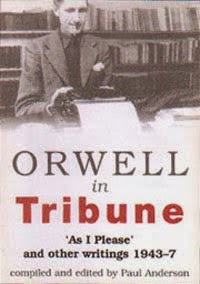